Yesterday’s strong bullish move has paused near the resistance level, as profit-taking has dragged the action following the upward thrust. Still, cryptos are advancing steadily, as Ethereum (+1.45%) continues bullish, and Bitcoin(+0.83%) buyers don’t allow drops below $7,000.  Among the leading coins, Tezos(+6.01%) us the best performer of the last 24 hours, with a special mention to DigiByte’s 17 percent gain. Among the leading Ethereum-based tokens, ChainLink(+3.87%) continues growing, followed by MKR (+2,21%), with special mentions to NEXO(+6%) and WTC(+28.68%).

The Market capitalization of the cryptocurrency sector has moved slightly above the $200 billion, breaking the descending channel. 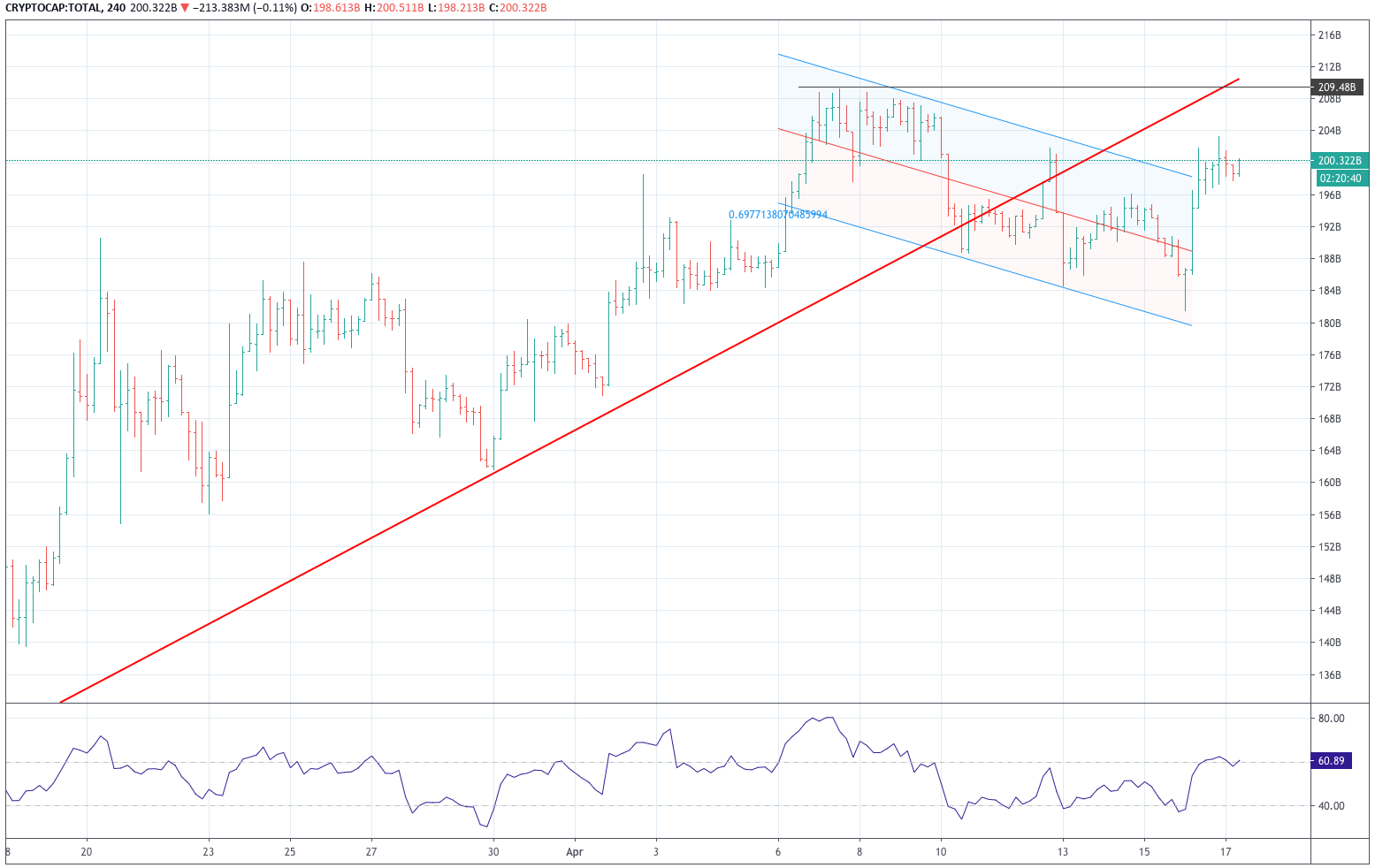 Dow Futures sprang up after a study by a Chicago hospital indicated that Gilead’s Remdesivir trial sowed rapid recovery from severe symptoms on 125 SARS-CoV.2 patients. Gilead shares surged over 16%.

Binance is going to launch a new Ethereum-compatible blockchain. The blockchain’s native token will be BNB in a move qualified as an Ethereum competitor, as it will support smart contracts besides BNB staking.

Bitcoin could be holding up to 5 percent of the BTC current supply, or about 360,000 BTC, according to the data supplied by a crypto blogger.

The Libra Association made new updates to the white paper with amendments to the original concept, including the introduction of stablecoins pegged to different currencies, to avoid interfering with the monetary sovereignty of the countries. On Thursday’s morning, Bitcoin has bounced off the lower side of an ascending linear regression channel, after the corrective action made in the past days. The movement created an engulfing figure in the daily chart and a Morning Star pattern in the 4H chart. The rest of the day and early morning today has been spent consolidating levels around 7,100, after being rejected by the $7,200 level.

The price moved away from overbought levels and is now moving along the +1SD Bollinger line, confirming the upward trend. MACD is also bullish. The price needs to break the $7,200 level soon to continue and test the $7,400 level that many traders eye as the next target. 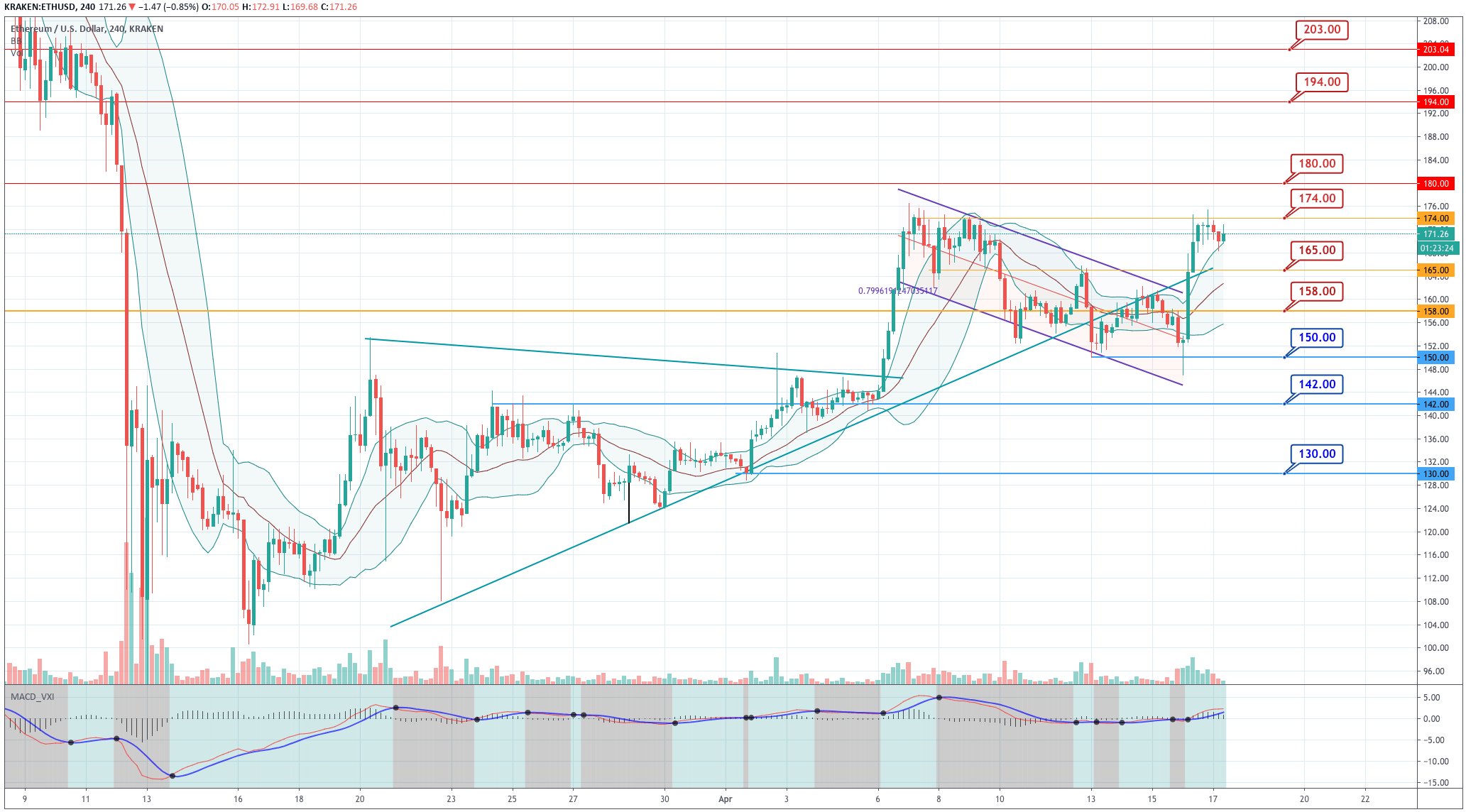 Ethereum’s reversal action has been quite bullish in the last 24 hours. After a strong Morning Star figure, the price continued moving upwards to challenge the 174 level. After being rejected there, ETH has been moving in a tight range its action approaching the +1SD Bollinger line on decreasing volume. The $174 Breakout will signal its next challenge towards the $180 and 194 targets. $164 may act as support.

Ripple has been following the overall crypto market trends, but behaving weaker. XRP is having difficulties to cross the $0.19 level. Nevertheless, the asset has managed to create a new consolidation above the previous one, but limited to the upside by $0.193.

After the bounce to the upper limit of the descending channel, XRP has crossed it and currently moves near the+1SD Bollinger line, as the bands spread and move slightly up, which is my definition of an uptrend. Buyers may consider entering positions on the breakout of the $0.193 level with a potential target at 0.205 level, the last swing high made on April 07.