Overview of the cryptocurrency market utilizing Point and Figure analysis. Any long or short entry ideas will be identified. 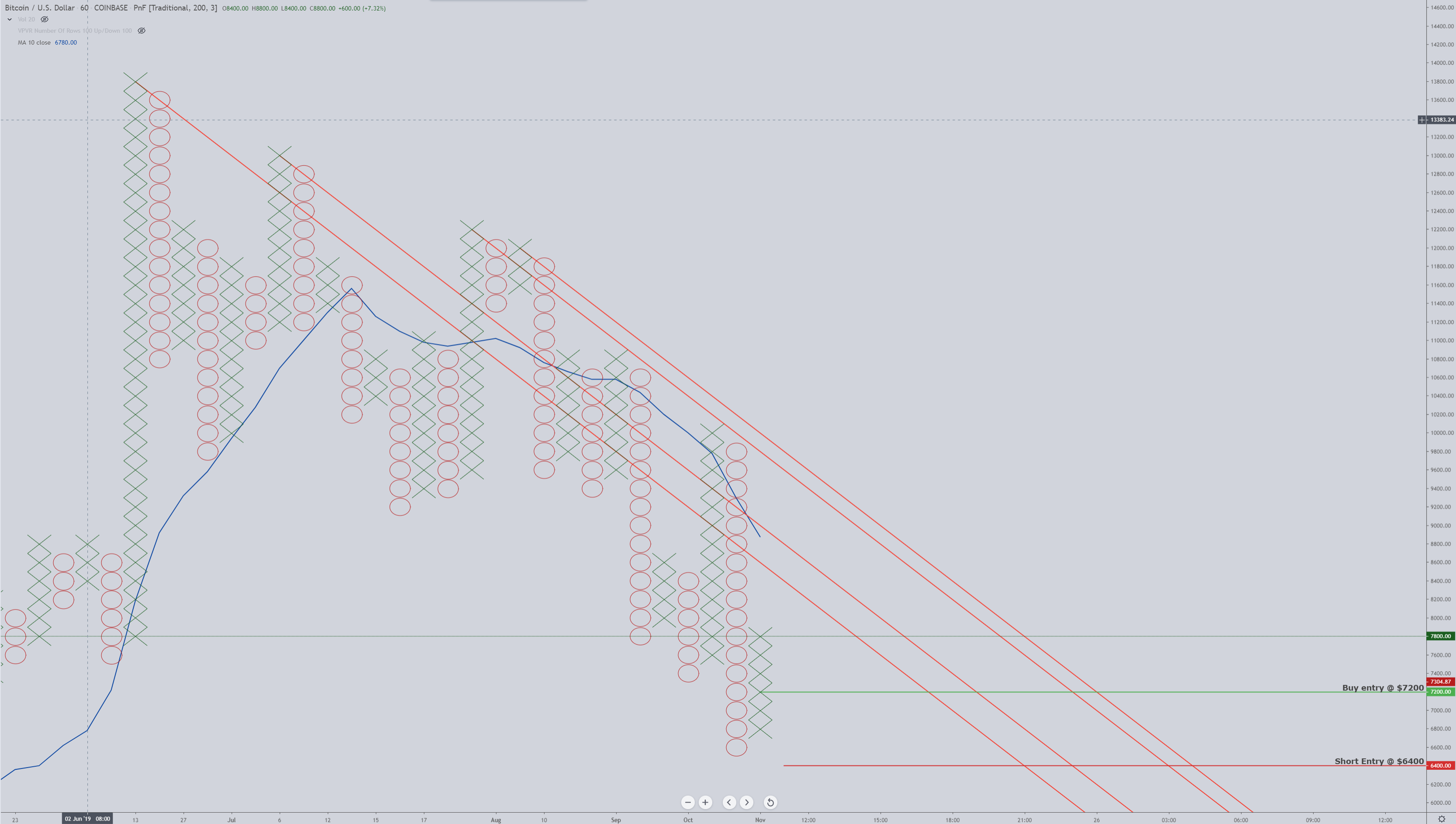 A prior trade idea from a couple of weeks ago identified a long aggressive entry at $7200. The highest X that Bitcoin has reached since the current X column was formed was $7800. For a new column of Os to form, Bitcoin would need to complete a 3-box reversal, which would occur if Bitcoin moved down to $7200. There is presently no condition to leave the aggressive long entry. On the short side of things, if Bitcoin moves down to $6600, it would create a double-bottom with a short entry at a break of that double-bottom @ $6400. 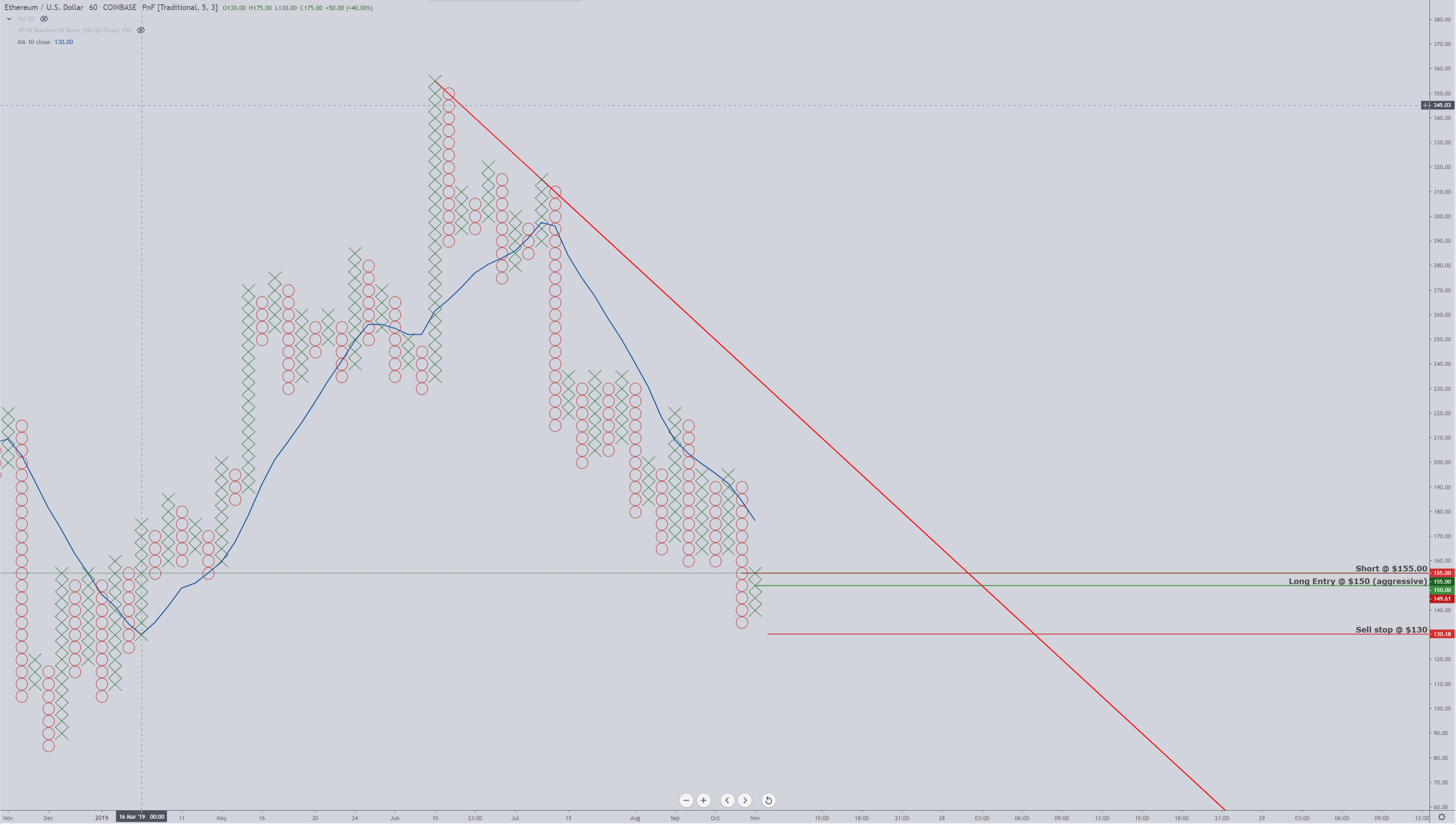 The short idea that I have listed at $155 was a prior short idea that turned into a nice profit. After covering that short for +4 boxes of movement down, I waited for a new X column to appear. An aggressive long entry was triggered right on the printing of the X column, with an entry at $155. This is an aggressive entry, and if I do get stopped out, I will at least have another excellent buy entry opportunity or a great short opportunity. The short idea is when Ethereum moves lower to form a double bottom at $135. Entry at $130 would be a break of that double-bottom. 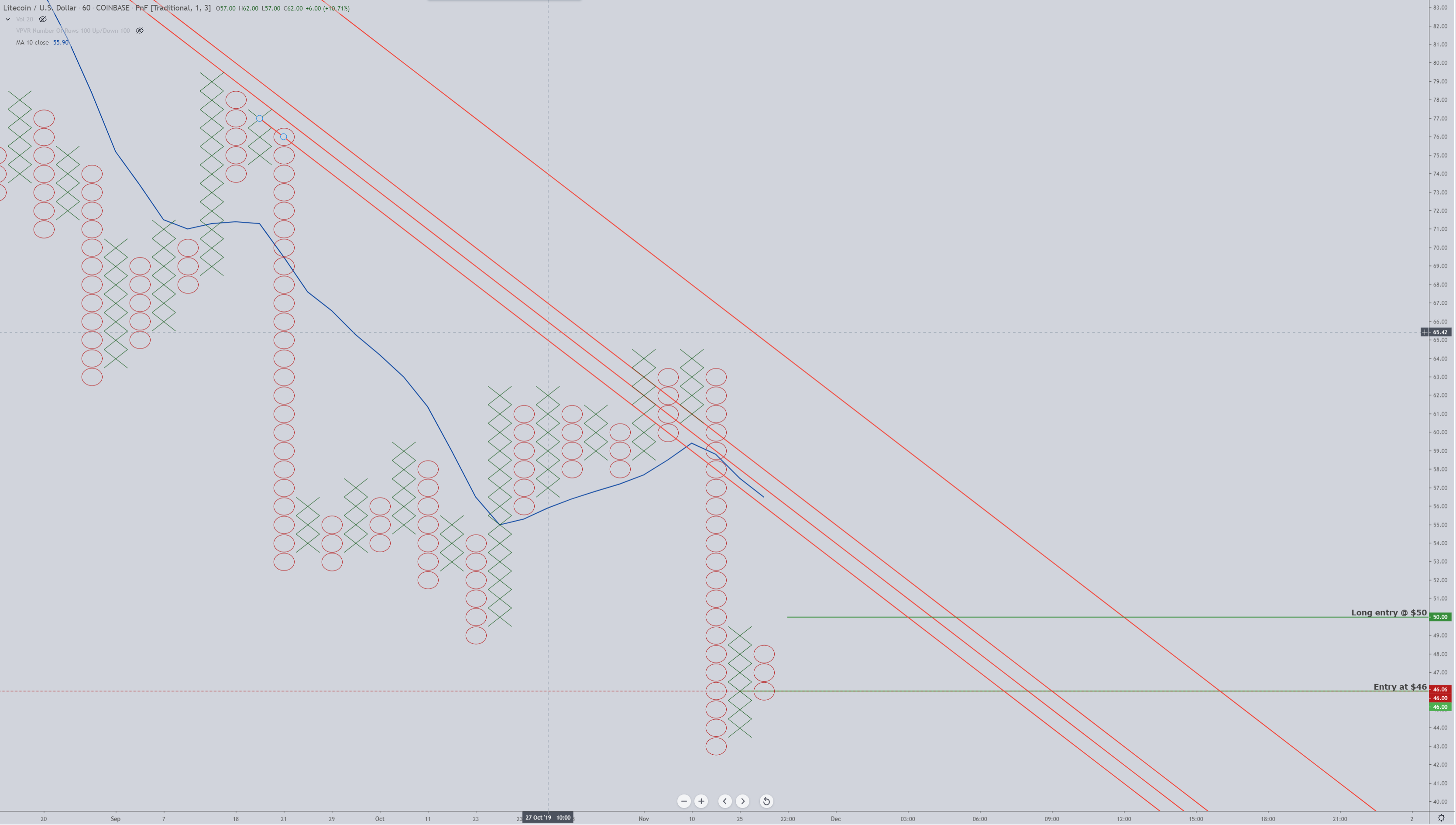 An aggressive long entry on Litecoin’s chart was triggered off the Spike Pattern of Os. The first reversal column of Xs was the entry, which occurred at $46. Litecoin moved as high as $49 before turning south and printing the current column of Os. I’m only looking at the long side of this market – the reasons for this are related to another, future article. The pullback from the aggressive long entry is a good thing, though, because it really helped develop the new entry target. When Litecoin returns to $49, it will create a double-top. The entry at $50 would be a break of the double-top and the break of a critical psychological resistance level.

On our recent Point & Figure article with this current setup, I previously identified an entry @ 0.075 for Cardano. The entry at $0.075 would have been a break of the 50% Fibonacci retracement of the current column of Os. I have since regarded this current column of Os not as a Pole Patter, but a Spike Pattern. Because of the change, the entry is lowered to a more aggressive entry. The entry is when the reversal conditions have been met for a new column of Xs to form: $.0.05. The reasons for this are related to the bullish fundamental conditions of the Cardano project and the beginning of the new incentivized testnet. There has been increased focus on the Cardano project, and the frequency of the updates and impending full release of the network has created one of the most significant cryptocurrency events in history.

Save money on your currency transfers with TorFX, voted International Money Transfer Provider of the Year 2016, 2017 and 2018. Their goal is to connect clients with ultra competitive exchange rates and a uniquely dedicated service whether they choose to trade online or over the telephone.
Find out more here.