Litecoin Price Analysis: The price value is moving towards the green zone and a great rally is expected on the part of the coin. The coin has shown a slight recovery in the previous 24-hours. The trend line is moving above the 30-days moving average and the 4-hours chart is in favor of the bullish trend. 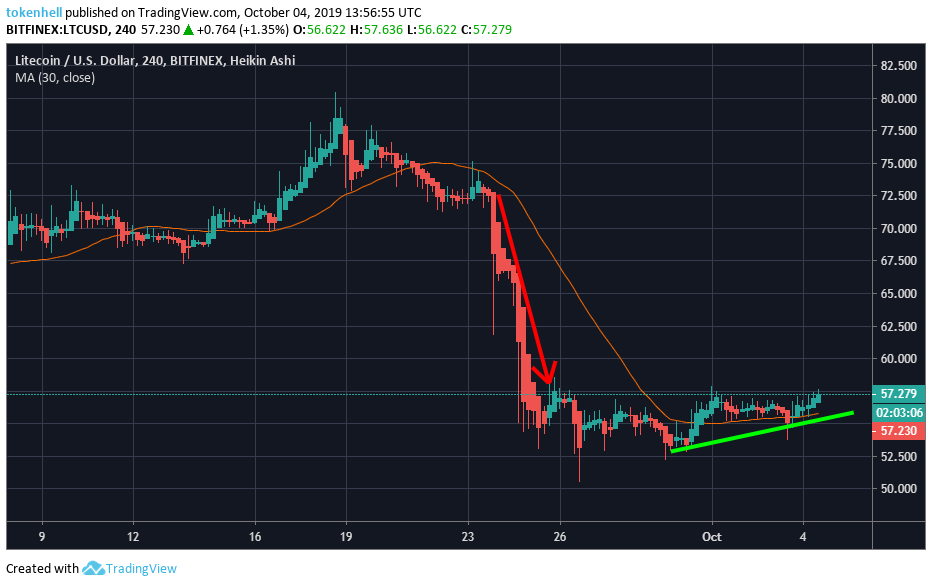 You can check the ups and downs of the coin in the past few days and these are represented by green and red lines. The value is decreased by -23.41% from 23rd to 25th September after a slight recovery. The trend line has sustained itself towards the current mark of $57.

The 30-day moving average is giving us a positive notion about the future value of Litecoin. The strong resistance level which is currently active and resisting the trend line from going upward. If the coin is successful in breaking this resistance level then a great rally is expected. The next target of the token is $60 that is going to be achieved in the next coming days.

The latest Litecoin core is going to release for full note implementation in the near future. The official announcement stated:

Litecoin Core, the most popular full node implementation of Litecoin is getting closer to its next major release.

Adrian Gallagher, who is a leading developer at Litecoin’s project said in a tweet:

Among the changes are refinements to block and transaction handling, the network code and P2P protocol, GUI, wallet and build system along with the typical plethora of new RPC’s and depreciation of many others.

The coin is present in consolidation phase and expected a great move. The support level at $57 is going to bounce the trend line in upward direction. The next target of token will be at $60.